We closed on both houses!  We no longer own property in Louisiana and are now officially members of the Clear Lake community.  Woo-hoo!

In the year and a bit that we lived in Bossier City, we never settled on a church.  That was hard for us since we had come from a church that we were very involved in and loved.  We visited several churches in different denominations, but never felt like we connected to any of them.  There was always something to be gleaned from each service but never a sense of belonging.

After being in Clear Lake less than 24 hours, we found our church home and have attended there ever since.  If that isn't God's goodness, I don't know what is.

Not only have we found the church but Diva is helping with a children's group, is involved with her youth group, and participates in the youth choir.  Engineer and I will be joining the choir once things settle down and will be joining a new Sunday School class.  I'm looking forward to joining the quilting group as soon as I get the chance. 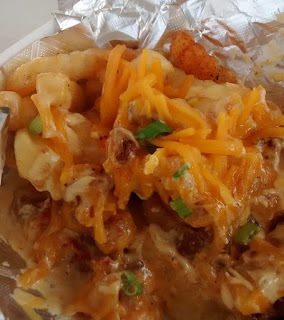 In a neighboring village/town/hamlet...they all run together around here really, there is a food truck park.  We had never been to one before and were all too happy to sit outside and try what was on offer.  Like this bit of deliciousness - Cajun Crawfish Poutine.  It looks like a hot mess but I assure you, it was AWESOME!  I had heard our Canadian friends talk about poutine for years and had never had it.  I'm pretty sure theirs never had shrimp and crawfish on it though.


Engineer and Diva had their introduction to sailing.  They have heard the sea's siren song and are smitten.  More lessons are to follow. 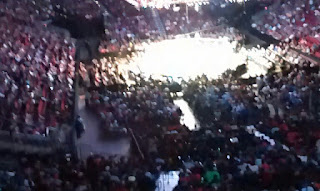 Engineer went to a UFC match with a colleague.  It turns out that his company's investors have box seats at the arena so he was watching the fight in style. 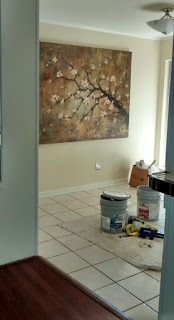 Work has begun on the house.  Roofers, painters, yard guys, and various other tradesmen have crawled in, over, and around our house beginning the day after we bought it.  That is in an effort to get everything ready before our things arrive on the 20th.  Fingers crossed, they will all be finished by then.