Just down the road from our hotel is a lovely dog park.  We go on weekends so the dogs can stretch their legs.  Engineer takes Winnie in the big dog park (dogs over 30 lbs.) while Diva and I sit and visit with the other dog owners in the little dog park (dogs under 30lbs.).

I am reminded of the scene from Disney's "101 Dalmations" where the dogs and their owners look very much alike when I look around at the folks and their canine companions at the park.  Besides the general amusement of seeing little dogs scampering around everywhere, the dog owners are amusing as well.  The older ladies know everyone in the park, their dogs, and their business.  It's something else.


I had seen that violin virtuoso Joshua Bell was going to be performing opening night with the Houston Symphony Orchestra and immediately got on the phone to try to get tickets.  I succeeded and we caught the champagne reception before the phenomenal performance to a packed house.

Engineer has had lots of meetings with company big wigs and investors lately.  Diva is increasingly enjoying school.

See that top book in the first photo?  I have not only read that one this month but the two that follow it in the series.  I could hardly put them down.  In fact, I used them as motivators for the gym - I only read them while on the treadmill (I did the same thing with The Astronaut Wives Club).  I highly recommend the series. 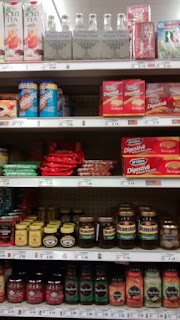 We've been grocery shopping at a Kroger down the road from the hotel and much to my delight, they have a whole section of British food.  It is outrageously expensive but to us it was worth the inflated price for some HP Sauce (a bit like A1 Sauce but fruitier) for our bacon sarnies. 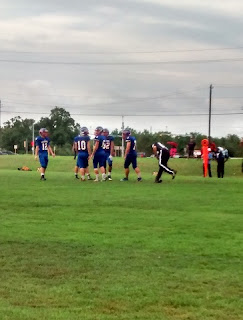 Diva's school has a six man football team.  It's an interesting way of playing and watching - most fans sit in folding chairs flush with the field.  There is a rule called something like the "mercy rule" which basically means that if a team is up by 50 points or more at the half, then the game is called.  I know this because the Warriors invoked that rule week one.  Go team!