As I said last Friday on my Facebook page, you know it's going to be a good day when a package from Collin Street Bakery shows up on your doorstep.

What made that delivery even sweeter was that we were scheduled to have dinner with some friends on Saturday night and I was going to bring dessert.  So instead of a messy kitchen and a bundt cake that didn't fully come out of the pan (does anyone else have this problem?) I had a clean kitchen and a rock star dessert for everyone to try - a Texas Blonde Pecan Cake. 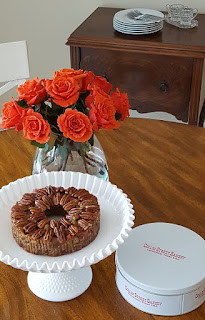 Of course that also meant that for 24 hours I had to continually swat the hands of my people who really really wanted to cut into the cake, you know - just to make sure it was acceptable.  Mmmhmmm...right...

Why were they so eager?  Because it was a Collin Street confection!  Enough said.
We are fans of their cheesecakes, their fruitcakes, their cookies, their breads, and now, we can add Texas Pecan Cakes to that list.

Please believe me that our affection for Collin Street Bakery is legit and deeply rooted.

In fact we like their baked goods so very much that we sent a fruitcake to England this past Christmas (it was received to rave reviews) and we're thinking about sending Texas Pecan cakes out for Mother's Day.  Shhh...don't tell our moms...

Back to our dinner party and the introduction of Collin Street's cake to our friends:

Everyone loved it!
One of the guys said, "I took a bite just to be nice, (I don't like fruitcake) but I ate the whole piece because it was delicious!"

While we were photographing the cake, us girls were nibbling on the sliced piece.
Not one person disliked the cake and everyone thought it was the best fruitcake they had ever had, even though it technically is a pecan cake and not a fruitcake.*

There are actually five different flavors of Texas Pecan Cakes:  apricot, pineapple, apple cinnamon, strawberry, and blonde. Each one is moist and dense in the best possible way and chock full of native Texan pecans.

I'm sure Collin Street has nothing against brunettes, but this Texas Pecan Blonde Cake sure was tasty.  The Blonde is a fun if not decadent mix of pineapples, papayas, golden raisins, cherries, and of course, pecans.

Maybe an idea for the future?  A Texas Brunette Pecan Cake...perhaps with chocolate chips?  Collin Street, you are welcome to my idea for a new flavor. 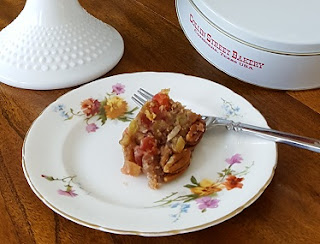 Right now, some of Collin Street Bakery's most popular items are on sale (with code from mailer) until June 20, 2016 - perfect timing for Mother's and Father's Day!
Look them up at www.collinstreet.com to find your perfect treat.

I received a pecan cake in exchange for my honest review.  All opinions, ideas for new cake flavors, and fabulous friends are my own.

*Collin Street Bakery uses their same honey batter for both their fruitcakes and their pecan cakes.
Email Post
Labels: Reviews