In May, I was asked to review a Collin Street Bakery Pecan Praline Cheesecake.  It was so good that this summer, when Engineer was passing by one of their bakeries while driving home from a business trip, he stopped in and bought another one...along with one of every kind of cookie they make.   We don't just talk about these products folks, we are honest-to-goodness customers.

So when I had a request to write another review for Collin Street, I jumped on it like a duck on a June Bug.  This time I was sent a Deluxe Fruitcake to try. 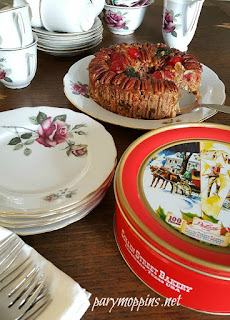 Johnny Carson quipped that there is really only one fruitcake in the world, and it gets regifted by everyone year after year.

Old Aunt Ethel's fruitcake becomes a humorous part of family folklore when she sends what can only be described as a semi-edible brick disguised as a fruitcake, annually to your house.

Then there is always the possibility of using a fruitcake as a doorstop.  Ba-dum-ching!
It's unfair really, to lump all fruitcakes in together.
They most certainly are not made equally.  Collin Street Bakery's fruitcakes are no joke.

For instance, did you know that Collin Street Bakery were the first ones to ship fruitcakes by mail order?  They have been using the same recipe for 115 years and are the gold-standard in fruitcakes.

What makes fruitcake perfectly practical?  I'm glad you asked.
I really feel like fruitcakes are the perfect holiday gift:  they are almost impossible to damage in transit, they are great to serve any time of day to holiday guests, they go with a wide variety of hot or cold alcoholic or non-alcoholic beverages, and nothing screams "Tis the Season" like a fruitcake.

I have tried my fair share of inferior fruitcakes and for a good portion of my life, I may have even snickered at fruitcake jokes in agreement with their tellers, but ever since trying CSB's fruitcake years ago, I am a fan.
I hosted my Bible study group this past week and wanted to serve the fruitcake to my girlfriends.  Some were very familiar with Collin Street's confections (one of them had lived in Corsicana where the bakery's headquarters is) and others had never tried fruitcake stating that it "looked scary."  I am happy to report that my girlfriend who was fearful of the cake actually thought it was delicious and that she would definitely eat it again.

Here's what you need to know about CSB's Fruitcake:

It isn't bitter.
It isn't too sweet.
It isn't dark and stodgy.
It isn't full of alcohol (although there are tips on their website on how to "doctor" it up.)
It isn't your Ol' Aunt Ethel's brick.

It is unbelievably chock full of fruit and nuts.
It is very dense and moist.
It is beautiful and well-packaged.
It is a good value for money.
It is decadent and more-ish!

Then boil the kettle, have a cup of tea and think of how much better that cuppa will be served with a slice of scrumptious Collin Street Bakery Deluxe Fruitcake.