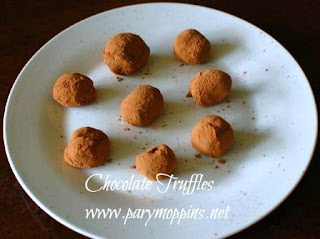 Earlier, I told you that we hosted our latest Supper Club at our house.

Since it was an English theme, we had to end the meal with chockies - that's just what one does.

I decided to tackle making simple truffles instead of buying chocs in a box; they seem much more impressive than they actually are.  Love it.

We really like dark chocolate and that rich, bitter taste that goes with it which is why I like a touch of cinnamon and coffee with almost everything I make that is chocolaty.  It adds to the richness. 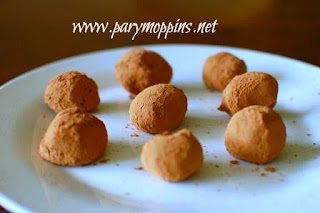 Heat cream to a boil in a saucepan (remembering the water trick.)

While cream is heating, dump chocolate chips in a heatproof bowl.

In another bowl, mix instant coffee powder with vanilla.

Once the cream reaches a rolling boil, turn off heat and pour over chocolate chips.  Stir with a whisk or fork until chips are mostly melted.

If your chips are not fully melted, put the bowl over a saucepan of boiling water for a few minutes to make sure the mixture is smooth.

Cover with a tea towel and leave the bowl on the counter to cool.  Once the bowl has cooled, put the ganache in the fridge to harden.

After your chocolate has hardened, take it from the fridge and scoop with a melon baller into the powder and roll to cover.

The truffles will be soft so it is recommended to leave them in the fridge until ready to serve.