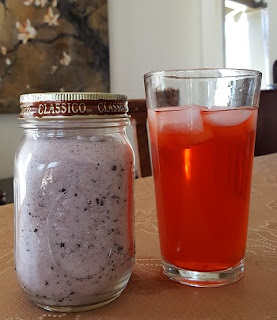 It's the middle of the first semester and by now a school day routine has been set and followed for the most part.

I know one concern we've had with Diva was that she doesn't drink enough.  How can she concentrate throughout the day if her body isn't properly hydrated?

Diva is not a fan of plain water - never has been.  That's a problem especially since we don't drink soft drinks often, I don't buy juice, and there is only so much milk one can consume (although Diva tries to push her natural limit.  That girl loves milk.)  We also don't use sweeteners so diet drinks are out.

AND she sees through that whole fruit infused water stuff; she considers that a waste of fruit.

She will drink water, but she doesn't enjoy it and will go for it only if she is really thirsty.  But as we know, by the time the brain registers thirst, the body is already on the path to dehydration.

This is my solution:  instant drink mix.  I can harp on the child to drink water and even monitor her intake when she's home but she is at school for most of her waking hours so at least I know she's had one glass of water during the day.


Is it the healthiest option available?  Probably not, but it does mean that her thermos comes home empty from school so I'll count that as a win.

Pour drink mix and sugar into a pint jar.  Screw down lid and shake contents in jar until mixed.
Stir in 2 teaspoons of mixture per glass of water.


Things to think about:

Two teaspoons of this mix is roughly 30 calories which is far less than most any other drink option.

You could use something other than sugar like honey crystals or coconut sugar if you don't want regular ol' refined sugar.

You could use powdered lemon or lime or even instant tea instead of the powdered drink mix if you don't want the food coloring involved.
Email Post
Labels: Perfectly Practical Recipes