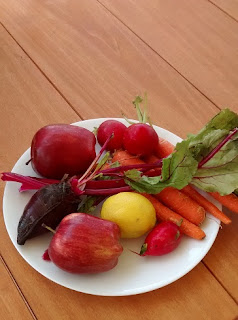 A juice fast sounds like a great idea...the day before you actually go on it.

I decided since I am already sitting in a strange limbo with the sale of our house and our moving date, I would try a detox.  I mean, why not?  Right?

Since moving to Bossier City, I have gained a whopping 10lbs!  TEN POUNDS!!!  What the?!  A detox was in order to reset my innards and start fresh.


Armed with my trusty Super Juice book, I followed the detox program as best I could.  Please note that I do not suggest this for the faint of heart nor do I recommend everything I did.  This is only an account of how I felt and what really went on...and it wasn't pretty.  You have been warned.

I feel like most of the time, we eat healthily.  I don't smoke and I don't drink to excess.  Cokes, ice cream, and chips are treats, not the norm.  But I do have a coffee addiction as well as a deep love of dairy products that could be considered sinful in some circles.
My body is sensitive to major digestive changes.  If I eat too many heavy fatty foods, my kidneys hurt, I feel sluggish and generally feel like a grease pot.  I thought everyone felt like that but Engineer says he cannot feel a difference; then again, he has a cast iron stomach.
I tried to do a Gillian McKeith detox once many years ago and didn't get past the morning before I was hurling.
The same thing happened when I placed a raw piece of sliced garlic on my hand to get rid of a wart*, after about 4 hours, the detoxification process was so strong that I was throwing up.

Preparation for This Time

I had been having a giant glass of juice every morning for a week to introduce my body to the process.
I bought all of the ingredients for juices as well as the accompanying raw foods I would be eating for the next few days at the store.
While Engineer was out of town was when I planned to start the fast.
Instead of gently weening myself off of coffee, sugar, and dairy, the day before I began the fast I ate Oreos and Fritos and drank Dr. Pepper with abandon.  In hindsight, that wasn't probably the smartest thing to do.

I started out fine and perhaps I was lulled into a false sense of security.  I read that I may get really hungry, since the nutrients would be absorbed so quickly, but not so.  In fact, I never made it all the way through my lunch yesterday, nor did I get to supper.  I was so full from the massive amounts of juice and the raw fruits and veggies.

What I didn't know when I planned to start the process was that Engineer had called a plumber out for a leaky faucet...which meant that the water would be shut off...on Day 1...thank the Lord he came out early in the morning.

By 11 I was craving a big juicy burger.

Around noon, I began to get chills.  I thought it was just the air conditioner, but apparently not.  Feeling cold is a common symptom of a detox regimen.

1 o'clock and I needed a burger and fries.

About 2 o'clock I started getting a headache, but it was what I expected.  Since there was no coffee on the horizon until day 6, I knew a headache would come my way.  The author suggested not to use any meds to fight the headache and instead drink water and power through the process.  Not fun but endurable.

Mid-afternoon I would have done nearly anything for even a cheap and nasty burger and fries.

Waves of nausea washed over me all afternoon and by 6 o'clock, I was throwing up - a lot.  That continued until about 11 that night at which point I fell into bed and didn't wake up until 7:30 the next morning.

I was thankful that my child is old enough to take care of herself for the most part, that I am a housewife, and that Engineer was out of town for Day 1 events.  I don't know what I would have done if I had small children, an outside-the-home job, or had to cook dinner.

By loading up on junk foods the day before, I probably set myself back a bit.

Cabbage & beet juice for breakfast and spinach and broccoli juice for lunch are just as unappetizing as they sound.  I would have rather eaten all of those foods raw than to juice them.

My salty and fatty cravings were also common side effects.

I dozed off multiple times.  I'm not sure how I would have coped with the nausea and headaches had I not been able to do that.

*The garlic did get rid of the wart by the way.
Email Post
Labels: Life at the Little Pink House