On the morning of January 1st, as Engineer and I were finishing up party prep for our annual New Year's Day Come & Go, Diva came barreling through the house, stopped short in front of us, and with tears in her eyes shouted, "THEY GOT THE CALL!!!!"

Diva and Abby, Anthony's sister, text back and forth regularly and before I was notified by their parents, Abby had already told Diva that they had received the call.

What call you ask?  THE call.  The one from the transplant team telling them that a heart had become available.

Our little trio stopped what we were doing and began giving praise to God and praying for Anthony, the Herman family, the doctors, safe travel, the donor's family, a perfect match, a speedy recovery, for anything and everything we could possibly think of pertaining to the transplant then we carried on our day - but not as we usually do.

All day we waited in great anticipation - like expectant family members waiting for the birth of a loved one - for news of a new life.

At the party, conversations continually came around to, "What's the latest?" and when an update did come in, it was shouted from the rooftop...or at least, from room to room and out the back door.

An impromptu prayer service was organized by our Associate Pastor and at 7pm, just as the service began, I received the text that said they were wheeling Anthony into surgery at that very moment.

And that was the beginning of the little "God nods" throughout the evening:

The operation went extremely smoothly and Anthony is doing well.

The Herman family covets your prayers as do the families of those other two children that I mentioned.

As the title of this post suggests, I've got a non-recipe for spiced cider.
Why did I think it was appropriate to post this recipe along with an update on our dear friends' son?
Maybe because it is red like a heart.
Maybe because it is heart-warming.  Groan...
But probably because it is served every single year at our New Year's party which forevermore I will consider Anthony's re-birthday party; therefore, this will be our toast to heart transplant recipients everywhere. 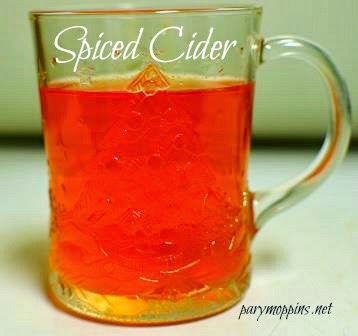 So simple, so delicious.

If you want to make a smaller quantity, put about a teaspoonful of red hots in the bottom of a mug and fill it with apple juice.  Microwave it until hot and red hots are melted.

This is part of FPT.