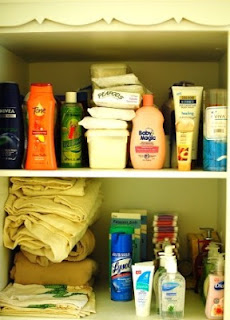 You've gotten started decluttering, kept plowing through the clutter, and stayed on top of it.

Everything has a place and is in its place because you have gone through:

You are sitting down with a cup of coffee, looking over your tidy domain when all of the sudden, something catches your eye - a stack of paper.  Where did that come from?  You have been dealing with stuff as it comes in, wait a minute...this stuff belongs to some other inhabitant of your household...

Now may be the most challenging step in your process.

Lesson #4 learned:  Getting your peeps on board the decluttering train

Surely by now, your family has noticed a difference in the way the house looks/smells (does anyone else noticed a musty smell when there's lots of clutter around?)

They may have just commented on something being different, like they don't seem to trip over stuff on the floor, or in my case, they aren't buried underneath a pile of laundry baskets from a closet avalanche.

As soon as they mention the difference, pounce on that opportunity like a duck on a june bug.

That is your window to rallying the reinforcements.

In our house, it's not just me who lays stuff down on the countertop and soon forgets about it once it's covered in other stuff.  I have a couple of other culprits living with me.
>Ahem<  You know who you are. 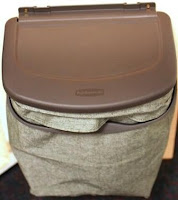 The best option would be for them to deal with their stuff as soon as they bring it in the house.  At the Little Pink House, the trash can and recycling bins are within 10 ft of the door so there is easy access (read:  no excuse for any of us) in dealing with paper clutter.

I try not to nag so instead, I have taken to moving their stuff to one location.  One location like their dresser, or their side of the bed so it doesn't affect the overall appearance of the house or my momentum and they do have to deal with their stuff.

The beauty in this approach is that the natural result takes its course; they learn (just like I did) that it is easier to deal with their stuff in small spurts rather than a massive overhaul.

And after you've convinced your family to get on board, what then?

Have that cuppa dahlin' because now is the fun part.  You can bask in the glory of your clutter-free home and decide what you will do with all of your extra time that you would have spent dealing with clutter.

I'll just refill my coffee cup before pondering that.