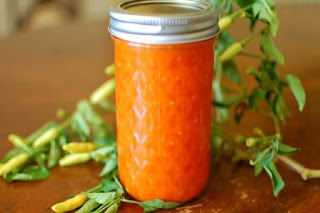 We decided to plant a tabasco pepper plant this year.  Why?  I don't know.

We eat Tabasco fairly regularly and have quite the stockpile of the piquant sauce, so why plant it?

And I did make some of the red stuff and it is blow your head off hot.  I kinda like it.  :)

Didn't make the green stuff exactly.  I just threw a bunch of green/immature peppers (tabasco, jalapeno, cowhorn, habanero, etc.) in a jar and covered them with hot vinegar before water bathing them.  It's not the same but it does the job.

I just made a batch of red sauce this morning since I had to deal with the last few peppers from both our garden and the CSA.

A few notes:  1.  This will cure what ails ya!  2.  Don't take a big whiff of the sauce.  3.  Wear gloves if you are dealing with lots of peppers particularly HOT ones.  4.  Whatever you do, don't rub your eyes or your nose after handling peppers.  Ouch!

Wash peppers.
Cut stems off peppers then chuck them, the garlic, and the salt in a food processor.
While they are whizzing around, heat the vinegar.
Once the vinegar is boiling, pour in a slow steady stream into the processor.  Give everything a good whirl.
You can strain the sauce through a bit of cheesecloth or a mesh strainer but I just leave them.
Shake before each use.