When we moved to England however, a whole new world of fish opened up to me.  And so far, I have not found one that I don't like.  So in some respects, Gorton's Crispy Talapia was batting a winner here without doing anything at all.

Now tilapia was a fish I had not really ever had until we moved back Stateside.  I had certainly never cooked it before I was sent some from BzzAgent to review, but was eager to give it a try.

Here's how we ate it: 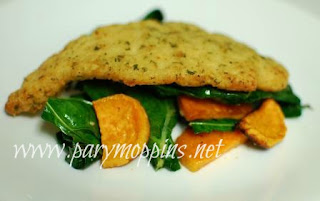 Cook fish as directed on box.

Peel potatoes.  Halve them then slice into half moons.  Coat in olive oil and lay on a baking sheet.  Sprinkle salt over the top of potatoes.  Put in the oven at the same time as the fish and cook until tender.

While that is cooking, coat the bottom of a skillet with olive oil then throw in the greens, garlic, and preserved lemon.  Cook until well wilted.  Toss potatoes in with greens.

To serve, place a fillet on top of the salad.

Thank you BzzAgent for the free sample of Gorton's tilapia to review.  All opinions and fish-loving ways are my own.