Perfectly Practical #132 - Get the Stink Out of Shoes 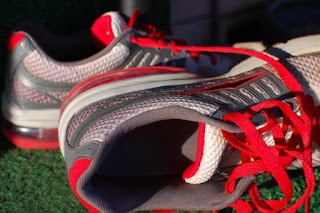 I love it when friends call with a perfectly practical dilemma.  :)

My sweet friend called to say that she and her family had been to the State Fair and after walking around the Fair Grounds, their shoes were disgusting.  "Smelled like sewage" (her words, not mine) disgusting.

She was calling not to make me jealous about going to the fair, or to gross me out, but to ask how to get the stink out of their shoes.

I made a couple of assumptions:  first, that their was mud on their shoes since they were fair grounds and not fair pavements on which they were walking.  Also, that they had been by to see the animals which meant there was actual sewage on their shoes.  Ewwwww.....

With that in mind here are the options I gave her:

It ended up that my friend stuffed newspapers in the shoes while they were drying.  Then she laundered them with vinegar in the water.  Apparently, it worked like a charm...unless her angle was to get a new pair of tennis shoes out of the deal, then it was more of a deterrent.  ;)