Perfectly Practical #127 - Have a Ringer 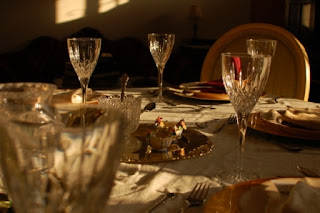 I'm sure we've all hosted or have been to one of those dinner parties at least once.

Engineer and I hosted one of those dinner parties.  We have chosen to learn from that situation to make sure that it wouldn't happen again.

We were living in England at the time, which incidentally is where we learned our entertaining style, and invited two couples over for dinner.  One would think between six adults, a pastor, a nurse, two Americans, an Albanian, and a professional translator, conversation would flow easily; but, one would be very wrong indeed.  (By the way, thank the Good Lord for the Albanian who at least tried to keep conversation volleying.)

Truly it was one of the most difficult dinners I have ever had the misfortune of sitting through.  And what was worse, we were responsible for it!

It wasn't because of any one person in particular, it was just that I was inexperienced at choosing compatible couples with which to dine and I needed a ringer.

From that point on, if I was hosting anything at all with people I didn't know well or knew that they were introverted, I called in ringers.

My English Ladies-Wot-Brunch were brilliant at this.  I would ask people over and then call my dear friends to help soften the blow; they were buffers so to speak.

Once, I was strong-armed into hosting a Come & Go party for someone I hardly knew and I had my 12 UK Ladies-Wot-Brunch on a 15 minute rotation throughout the length of the party.  They were a Godsend; especially since very few others showed up to the party.

Now that was an extreme case but it holds true for all kinds of events.

A ringer is not only someone who helps with conversation, but many times, it's that person (or those people) whom you trust and can rely on to just do what needs to be done.  That could include the person who helps with setting up for a party, brings in more ice or food mid-party, or washes dishes and sweeps when it's over.

Being a "Ringer" is reciprocal; you may be called in as someone elses' ringer.  I feel great comfort on both sides of the situation.  I so appreciate when I can lean on someone and I like being able to help behind the scenes for them; it puts everyone at ease when they know it will be okay.  Or if not, at least they can laugh about it with their friend afterward.  :)

This is part of Works for Me.