Things That Go Bump In the Night...and In the Morning

Friday night, Engineer was out hunting so it was just us girls.  All alone.

I flipped on the light and saw nothing in the garage.  I thought I must be hearing things since birds are roosting by this time.

9:25pm  There it is again.  This time with a chirpy squeak, a squeaky chirp and a, no that's not right, it can't be a high pitched growl?  Maybe it's that stray cat that's gotten into our garage before.  Flipped on the light and still nothing.

A wave of fear and annoyance washed over me.  What if it's a bat, a mouse, or lord help us, a possum!  And why isn't Engineer here to take care of this?  Apparently, he could do some hunting on our own property!

10:45pm Way past my bedtime.  Still with the noise.  Oh. My. Gosh.  Okay, pull yourself together.  You and Scarlett O'Hara have a common mantra "I'll think about that tomorrow."

8:55am  More chirping.  Still can't see anything in the garage.  Starting to feel like a prisoner since there is NO WAY that I will be walking out into my garage to get in my car.  Whoa!  What was that?!  A bottle tumped over (anyone from up North know what that means?)  I look out the garage door window and there, plain as day is a juvenile squirrel.

8:56am  Call made to Super Mom asking to borrow Neighbor Boy #1 to get the critter out of my garage.  He wasn't available so she said that she and Super Dad would come over.

I let the cat out thinking the squirrel would get scared and run out of the garage the way he came in but that was not to be.  The cat went over to the squirrel, sniffed it, and started to play with it.

Oh No!  What have I done?!  Now the cat will kill it and I will have to clean up CSI style!

So I went outside to bring the cat back in and noticed that the cat would actually walk away from the squirrel and the varmint ran up to Trigger and head butted him for attention.  He was pursuing my cat!  I was trying to figure out how to get the cat out of the confrontation without the squirrel turning his beady eyes on me.

I had visions of The Mississippi Squirrel Revival


If Super Mom & Super Dad would have arrived 30 seconds earlier, they would have seen me in my pajamas on top of my car screeching like a banshee.  Y'all, no exaggeration needed.  Just ask the joggers who ran by at this exact moment.  They were looking at me like I was a complete nut job, but, they can corroborate my story.

I eased my way off of the hood of my car and backed up into the house.  About that time, the Supers show up, laughing.  What happened next is all a bit of a blur.  Somehow or another I got the cat in the house and through the screen door, I hollered to the Supers that the squirrel was under the car.  Super Dad said, "There's nothing under the car."  Whew!  He must have run out of the garage.

"He's right there!"  Is he pointing at me?  My eyes followed his finger and there, with nothing but a screen door separating us, was the rodent.  Staring at the cat with a defiant "Bring it on!" look in his crazed squirrely eyes, was that dad blame creature! 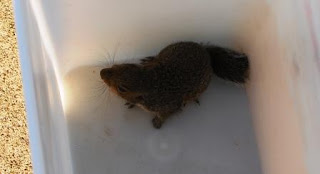 Super Dad grabbed a handy bucket and scooped up the squirrel with no kerfuffle.  It was at that point that we all took a look at the assailant.  By this time, Diva went to get Neighbor Boy #2 and a couple of other kids from the neighborhood happened to be walking by and came for a look-see. 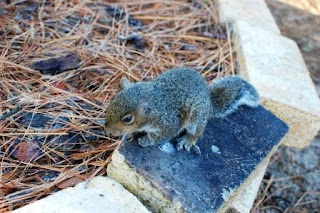 The poor baby had no front paw, missing back toes, and no left ear.  These were old injuries that had healed (so glad they weren't due to Trigger's rough-housing) and Super Dad named him Lucky.  (Engineer later said that we should have called him Scrappy.)  We put him over in another yard without cats and Super Dad even pet it. 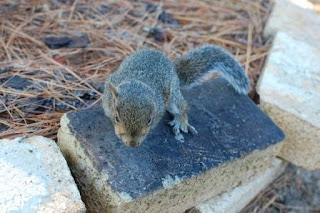 I will not be surprised if he ends up back in my garage with his buddy Trigger the cat.  But at least I'll know that sound the next time I hear it is NOT a possum.

(The pictures were not altered at all, there was no zoom involved.  That's how close the animal let Super Dad get to him.)
Email Post
Labels: Life at the Little Pink House