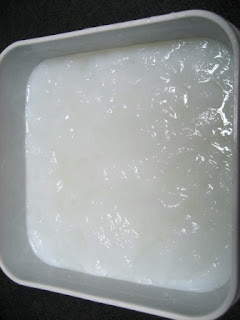 I made laundry detergent November 2010 and after giving away at least a gallon of it, I still have about a week's worth left.  We could have easily gone a year on that bucket full!

To add to the do it yourself nature of things, I added hand soap to the repertoire.  It's not bad.  The soap is kind of stringy but other than that, I think it is just fine.  When a gallon of hand soap costs me $0 (I used Ivory I had bought with a coupon that made it free) I am a happy girl and can deal with a little stringiness. 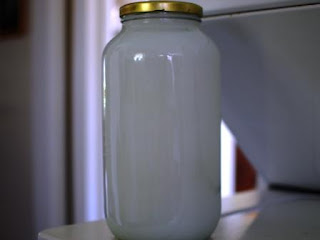 
While the water is heating up in a pot, grate the bars of soap.  I used the food processor but you can use a "knuckle buster" if you want to.  (Anyone else's family call a grater a knuckle buster?)

Put the grated soap in the hot water a handful at a time so that it doesn't bunch up and become a clump.  Give it a good stir until everything is almost melted.  Then put a lid on the pot, take it off of the heat, and let it sit for 15 minutes or so.  (My recipe says to use a hand mixer at this point but I didn't do that.)  Let the mixture sit over night.

The next day the mixture will be gelatinous and gloopy.  I did use the hand mixer at this point.

If it is too thick, add more water and if it is too thin, it doesn't matter.  That's it.  Super simple and now you have over a gallon of hand soap.

Even though it's not edible, there was cooking involved so it is part of Miz Helen's Full Plate Thursday.
Email Post
Labels: Recipes What's Cooking