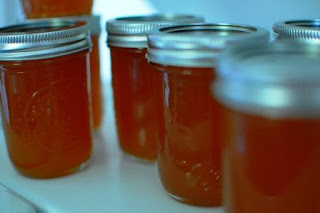 This week I have continued the canning.  It seems to be the story of my life.  :)

Some amount of experimentation came into play.

Lovely neighbors dropped off a huge bag of crabapples on my doorstep.  Those of you who have worked with crabapples before, you know that it takes approximately 3 and a half tons to produce a pint of jelly.  Okay, so my numbers might be a little off, but not by much.

There were a couple of cans of peach nectar that had been lurking in the pantry for some time and really needed to be used.  So instead of plain old crabapple jelly (which you know I love) I used the peach nectar as well and made crabapple peach jelly.  It tastes pretty good and the best part is now I know that I can use nectar if I am in a pinch and need to bulk up my juice content for jelly.

Next, all those pears from last week had to be peeled and I couldn't bare to throw them in the compost bin without at least trying to make pear peel jelly out of them like I did with the peaches and raspberries earlier in the season.  As I peeled the begillion pears, I shoved the peels in ziptop bags and put them in the freezer until I could get to them.  Since the peels were just boiled in water, they were still compostable.  Nothing wasted.

So here's the recipe (I doubled the recipe since I had so many peels): 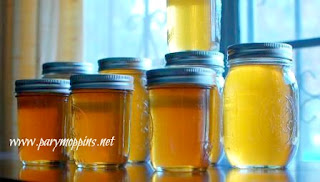 Dump the peels in a non-reactive pot and cover with water about an inch over the peels.
Cook the peels for about 20-30 minutes.  Strain out the peels and cinnamon stick.  You can strain the juice through a cheesecloth if you would like - I didn't.
Add water if you need to - you want 7 cups of liquid.
Put the juice back in the pot and add the pectin, whisking all the time.
Bring to a rapid boil.  Add the sugar and get it back to a hard boil for a couple of minutes.
Pour the jelly into sterile jars and water bath them for about 5 minutes.

The jelly sets better after it has been refrigerated for a couple of days.  This is one of my favorite (and most successful) experiments and will go into my annual canning recipe file.  The jelly really did turn out very yummy and just begs for some fluffy homemade biscuits to sop it up.  Next time, I would like to try this again with a vanilla bean boiling away with the peels and cinnamon.  It would be like pear pie in a jar!