Perfectly Practical #70 - Use What You Have 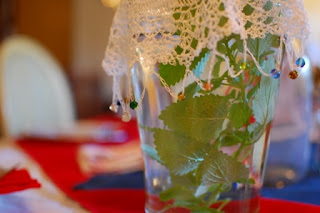 This perfectly practical could also easily be called "get creative" or "you don't have to be Martha" or "everything has another purpose." Okay, so maybe not everything, mosquitoes don't seem to have more than one purpose, but they weren't part of my dinner plans either...moving on...


Last week I told you what we ate for Supper Club but as I was thinking about the picture in the post, I realized that it was a very good illustration of my whole philosophy about being frugal:  be intentional and make the most of what you've got.

When Engineer and I were discussing what theme/recipes we wanted to have, he asked if I was going to bring out china and the whole nine yards.  I said that I had a different route in mind - casual.  Really really casual. 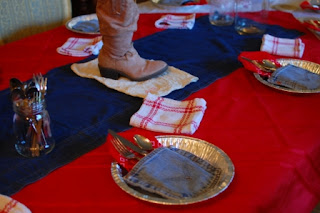 My fabulous friend Wastutesy is always repurposing fabric of any kind.  I asked her what she did with the pockets of all the jeans that she has collected.  I told her about an idea and she made it a reality.  She gave me these jean pockets with bandannas stuffed in them for Christmas one year.  I knew I wanted to use them to keep the napkins (bandannas) and silverware together at each place setting.  Once we served dessert, we used the pockets as chargers.

Jars were used for everything from frosted drinking glasses (the kind with handles) to condiment dishes (I squirted the condiments into the jars beforehand).  We served pickles and relishes straight from jars, had a jar on the table with extra spoons and forks for the pickles and sauces, and even ate our dessert out of half pint wide mouthed jars. 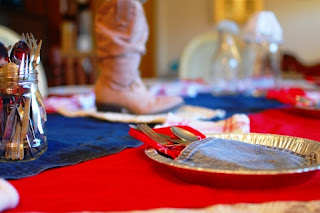 For the centerpiece, I stuck a vase in one of Diva's old boots and put a candle in the top.  The boot sat atop an old cloth sugar bag﻿ which was on top of a denim window valance that I used as a runner.

Instead of plates, we ate off of pie tins and used them to put burger fixings on the table and rags were used as coasters.

Milk jugs were our decanters and to keep dust out of the tea, I used cupcake liners as toppers for the jugs.

Even the pictured pitcher is normally part of my Texas kitchy decor and was pulled for this occasion, along with the lemon balm that I have growing in the back yard.

Just to recap:
Next time you think that you need to buy all new serving dishes and decorations in order to host a great dinner party, think again.  Look around your house and see what you have on hand.  It will make for a far more memorable experience for you and your guests.

This is part of We Are That Family's Works for Me Wednesday.
Email Post
Labels: Perfectly Practical