You Want It? You Got It! Easy Chili Recipe 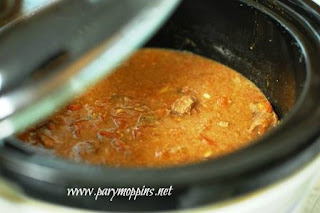 In response to a comment left by Miz Helen, I am posting my Crock Pot Chili recipe...I use that term recipe very loosely of course.  It's more of a suggested ingredient list then you get to do some tweaking of your own.

It's never made exactly the same way twice but the basics are there.

Here's how I made it yesterday:

Dump it in the Crock Pot and set the temperature to low early in the day.
Stir once after a couple of hours.
By supper, it's ready to eat.  There is something to be said for simplicity.  :)

Explanations on how this chili came to be:


If you have ever thought that you life was missing a little something, it may be that you have never come across the Tone's brand Chipotle Seasoning

.  This stuff is golden.
It gives just enough kick to just about anything.
Roll baked potatoes in it instead of salt before you wrap them in foil and bake them.
Sprinkle it over roasted veggies.
Put it in soups, chilis, beans, oh my word...anything!
It is awesome and sometimes is tricky to find.  Sam's carries it - sometimes.  It is worth the hassle trying to track it down...or just get it from Amazon.  What did we do before Amazon?

On another note, I put in the menu plan that I would have this Tuesday with cornbread waffles but it smelled so good while it was cooking that I decided to serve it last night instead.
Also, I had forgotten about a cast iron divided cornbread pan

that I picked up at an estate sale a couple of weeks ago and decided to try it out instead of the waffles.
I was a little skeptical since I thought it would be a huge hassle getting all of those wedges of cornbread out of the pan if they stuck but wanted to give it a go.
Let me say that I am sold on the wedge!
That yummy crust that you get on the edge of traditional cornbread is all the way around this way (just like with a waffle).
There was no problem flopping them out of the pan either.