We had a bug problem on our tomatoes.
They were nasty big mean rabid critters with saliva dripping from their fangs...well, they might as well have been.
Really they were these 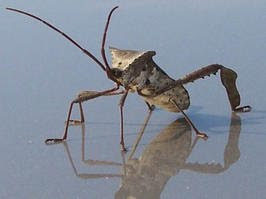 It is daring you to remove him from the premises!

Engineer did a little research and he found out that after they decimate your tomatoes (and potentially other plants too) they will infest your house!
Holy moly!

I have mentioned that I wanted to keep our garden as natural as possible but having these guys all over my tomatoes was seriously cramping my style.  That's where Engineer came in like a knight in shining armor. 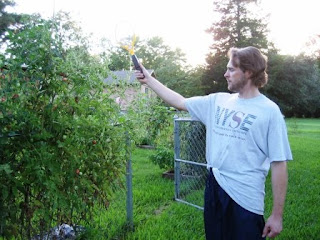 Look at him there with his arm to the heavens with the light just catching on his perfectly proportioned features.  (If I knew how to photoshop, I may have put a toga on him...or turned him into the Statue of Liberty...just for fun.) 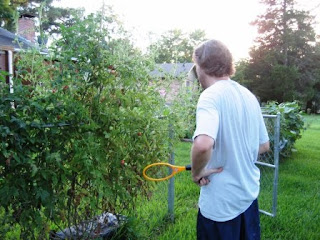 It's serious business trying to be sensitive to your organically inclined wife.

Engineer is so thoughtful, he bought us matching electrified bug zappers so that we could spend time together shocking red wasps and leaf-footed bugs.

The reality is that I wasn't going anywhere near either of those insects so Engineer had to go it alone.
Which he did very well.

However, the leaf footed bugs have an exoskeleton (that's a word I don't get to use often) which makes the shocking a little less effective unless you touch them just right.  So Engineer would stun them and squish them...which took a lot of time...and there were hundreds of the suckers...so in the end...without me knowing it...Engineer used face melting chemicals to give my tomatoes a chance.  It worked - yea!

Thank you EM for going along with my notions for as long as possible before you swooped in and got the job done.