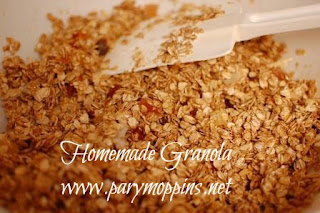 Ms. Crystal from Money Saving Mom was kind enough to allow me to post this recipe for her yummy granola that was served at brunch today:

Mix the first 3 ingredients together in a small saucepan and bring to a boil.
Remove from heat and stir in the vanilla & cinnamon.
Pour over oats and stir until coated thoroughly.
Spread oats in a 9 x 13" pan.  Bake at 375F.
After 10 minutes, take out the granola and stir (it will still be a bit sticky.)
Put the pan back in the oven then turn it off.
Leave it overnight and then have some on your yogurt the next morning.  Mmmmmm, delicious!

I had never made granola before and this was not only super simple but it was also frugal, healthy, and most importantly, very tasty.

*UPDATE*  Since I have been making this for years now, I have tweaked it to our tastes.

I use at least a tablespoon of cinnamon and I dump two boxes of dried fruit (usually the tropical blend but whatever I have on hand) in the oats as well as flax seeds (when I remember to throw them in.)

When I say it will be a bit sticky, I mean A LOT sticky.

When you take it out of the oven the next day, it will be hard.  I try to break it up in the pan a little bit.

I put parchment paper in the bottom of my metal pan because the stuff will stick like crazy or spray the heck out of my glass pan before I put the granola in it.

The method is still the same and I make this constantly because my peeps really like it.

My recipe was featured on Pin It Tuesday!

This is part of Miz Helen's Full Plate Thursday & Works for Me.
Email Post
Labels: Recipes