Engineer Moppins forgets my birthday (no matter how many hints I drop.)

Diva is my saving grace for Mother's Day since she will remember and he won't.

Christmas has been known to not really make a blip on his radar; but, our anniversary, that's where he redeems himself.  (I wonder if that's because I had our wedding date inscribed on the inside of his wedding band?)

He doesn't usually plan an evening, he plans a weekend...down to the last detail.  Flowers & chocolate dipped strawberries in our hotel room, or weekends in Vegas, Dartmouth and Bath, England, Paris (that's France, not Texas) this is the bar he has set.  This year, EM and I had another marvelous albeit unconventional anniversary.

EM had promised to paint my parents' bedroom and as it turned out, the only day he could do that was on our actual anniversary.  So we spent Friday together instead.

We had some coffee and started making plans for our garden.  Before we set out to procure all items needed to build the raised beds, we had lunch at a local pizza place where we befriended a lady traveling by herself (all the way from South Carolina) to meet a childhood friend she hadn't seen in 38 years.  After a yummy lunch and an interesting conversation we headed off to the feed store...then to Lowe's...then to Tractor Supply (which needs to be a post in itself "The People You Meet in Tractor Supply")...then to the lumber yard...then to Wal-Mart (that was my least favorite part) and finally back home to start on the frames.

Not long after EM had finished the final frame did we have to leave to meet my parents and brother & his family at a local catfish restaurant.  Although it wasn't a conventional anniversary celebration, it was relaxed and we spent the whole day together. After our previous jaunts for our anniversary a day trolling around feed stores didn't really seem like it would measure up to expectation - oh, but it did.

method out so he made the whole day about getting prepared for the garden.  That was all for me, he thinks a garden blemishes our yard and really has nothing to do with it so for him to spend the day toting bags of compost here and there and trying to track down vermiculite

- my friends, that is love.   We read the Five Love Languages

book together and spending time together was one of our languages so the day could not have been more perfect. 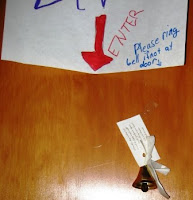 I was so thankful that we had spent so much time together the day before because on our actual anniversary we hardly saw each other at all.  EM painted all day and Diva & I were at the house cleaning, cooking, and generally puttering about the house.

EM & I got a most wonderful surprise invitation for a private concert at an exclusive club.  I had a conversation with the manager of said club and was told there was a dress code (I was wearing my cleaning house clothes) and it was fancy, or I could wear what I was wearing if I added some jewelry.  :)

Once EM got home, covered in tiny paint speckles, I showed him the invitation and we followed the instructions on the door. (The bell used was a favor from our wedding.)  When we walked through the door we saw the set and we had place cards in our seats.  And yes, I complied with the dress code and was wearing some jewelry.  :)

Diva proceeded to put on a show that consisted of her singing to The Lion King soundtrack into a flashlight.  It was the most precious gift I have ever been given.  She was so excited and had been practicing most of the day so I tried not to let her see my tears while she was so emphatically crooning "Can You Feel the Love Tonight" complete with Mariah Careyesque twiddly bits.  I can honestly say that no anniversary can match this one and that's why this is a Madly in Love Monday 2fer:  I am madly in Love with my Engineer and with my Diva.  1-4-3 EM & DM